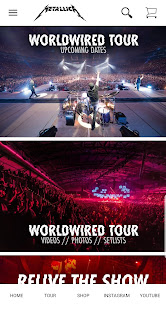 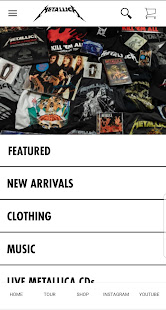 Metallica was formed in 1981 and has become one of the most influential and successful rock bands in history garnering multiple Grammys, setting sales records and making history when they became the first act to ever play all seven continents in one year, scoring them a nod in the Guinness Book of World Records. In November of 2016 their 12th studio album, Hardwired…To Self-Destruct, was released and the band embarked on the WorldWired tour that will cover all corners of the globe.

The app is your WorldWired tour guide. Before the show pick up info about tickets and VIP packages, special offers, opening bands and more. After the show check out the set list and the app will be packed with photos and videos along with information about live downloads of the show.
All things Metallica WorldWired Tour at your fingertips in one place, right on your mobile device.

Features:
- All the WorldWired tour dates starting with the kick-off in August of 2016
- Ticket, VIP experience, and concert information
- Live videos and photos from every show on the WorldWired tour
- Shop the latest Metallica gear in the store
- Connect to Metallica's social and media channels

New free content will be updated regularly as the tour rolls around the world.